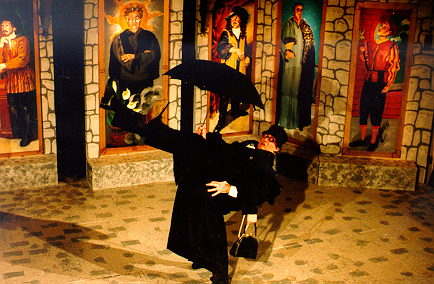 First produced in 1887, Ruddigore was Gilbert and Sullivan's eighth operetta, and would have been a greater popular success if Mikado hadn't been their seventh. This is our third production of Ruddigore, and is the first to incorporate the original (and usually omitted) second act finale, "When a man has been a naughty baronet," which we've combined with the traditional reprise of "Oh, happy the lily."

In the original production of Ruddigore, Gilbert called the men in Act I a "chorus of Bucks and Blades," and dressed them in military regalia. We've moved the period of the piece from early 19th to early 20th century, and have altered the character of the men's chorus, as well; we call our group of weekend sportsmen "chorus of Upper-class Twits".

And speaking of curses, generations of less-than-nimble tenors thus honor the memory of Durward Lely, the original Richard Dauntless, for it was at his suggestion that Gilbert inserted a hornpipe following Richard's opening song.