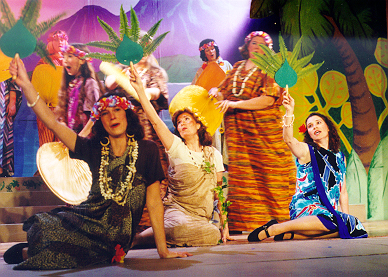 In 1893, the year Utopia, Limited was produced, Princess Kaiulani of the independent monarchy of Hawaii was receiving a "proper" education at a private school in England. She was the talk of the society pages, with much speculation as to the influence English "civilization" would have on the Princess and eventually her homeland.

Thirty years earlier, Anna Leonowens arrived in Siam for a six-year stint as governess to the king's children. She later wrote two popular books and gave lectures about her experiences. (These books would later become the foundation for Rodgers & Hammerstein's The King and I.)

These two ladies (who may have influenced the characters of "Princess Zara" and "Lady Sophy" respectively) plus Gilbert's disdain for England's Limited Liability Act, provided the historical basis for Gilbert & Sullivan's thirteenth comic opera.

Initially, Utopia, Limited was a moderate success, running for 245 performances. George Bernard Shaw thought it was Gilbert and Sullivan's best. But it did not stand the test of time. The quirky plot, large cast, and expensive running costs discouraged revivals. The D'Oyly Carte Opera Company did not revive it until 1975.

Surprisingly, in the United States, where its satire would seem to be less relevant, Utopia, Limited has taken a stronger hold. It became popular starting in the 1960's and is now performed in America almost as often as Ruddigore, The Sorcerer, or Princess Ida.

"Utopia, Limited" means "Utopia, Inc." In England, a limited company is the equivalent to an American corporation. When the king and chorus sing of "the Joint Stock Company's Act of Parliament sixty-two", they are referring to a real law. If a company should go bankrupt, this law established shareholders' limits of liability to the amount of their investments.

Also, you may notice the reference to our own George Eastman's product and slogan in the princess' duet. In 1893, Kodak cameras had only been around for five years; so we have to commend the Utopians for being up-to-date.