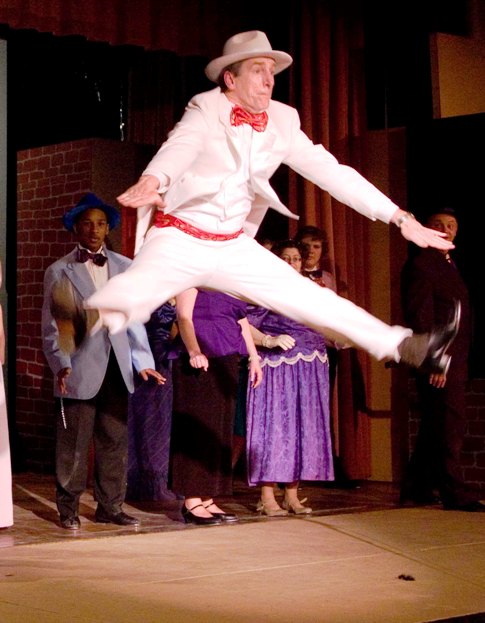 All performances held at Salem United Church of Christ.

Space...the final frontier. These are the adventures of the Off-Monroe Players, whose continuing mission is to seek out Gilbert and Sullivan operettas, bring joy to their audiences, and boldly go where no G&S company has gone before.

Who would have thought that Star Trek could be an inspiration for a Gilbert and Sullivan operetta? When I first heard of Hot Mikado, I wasn't sure how I could justify being in a different time and place and still be in Japan. Then I remembered an episode of Star Trek called "A Piece of the Action". So many episodes of Star Trek visited familiar times and places, one of them being the gangster era, and so it began.

We've created a Gangster Fantasy for you. It represents the best of New Orleans, New York and Chicago of the 1940's in both songs and style. We are on another planet where the Japanese culture mixed with the 40's style of America. Our Gentlemen of Japan are a group of gangsters, mostly from New York. The Mikado is a Southern Gentleman and Katisha is Mae West meets Southern Belle. Ko-Ko resembles a misunterstood and nervous Woody Allen. Our action takes place in and out of Club Titipu where everything's happenin'. There has been a lot of fun singing, swinging and tapping our way through our beloved Sullivan melodies — just a little heated up. We hope you like our departure from the Gilbert and Sullivan norm. Sit back, relax and enjoy our Gangster Fantasy: Hot Mikado.