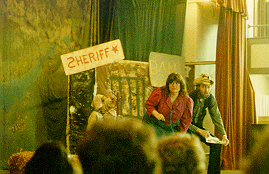 The evil villain Brock Porter wins a great deal of money from Martha Marple's father in a card game. Brock tells Martha Marple that he will collect the debt by taking away her father's store unless she marries him. Martha refuses, but doesn't know what to do. Meanwhile, brock's evil helpers, Bandito and Muggs, are trying to rob the bank and Rosie, the saloon keeper, is waiting for the Swedish Nightengale to come to town.

Enter Rufus Plumbob, the smart and brave old prospector and his trusty mule, Clemetine. They have come to town to see the Swedish Nightingale. Rufus meets Isadore, the rather boring librarian, who confesses that he loves Martha Marple who doesn't even know he exists. Then Isadore talks with Martha who says she hopes some "Strange Rider" will come to town and save her. Then the sweet lady, Gladys Gladabout, is robbed of her kumquats and quinces, and Sheriff Goetzem and his deputy, Horseshoe, try to solve the mystery.

When the stagecoach rolls into town with the Swedish Nightingale, there is another passenger on board. Can you guess who it is? Brock is in for trouble now.